Walking past a new restaurant in Newtown I stopped to sticky beak at the menu. Gluten free pizza caught my eye, and our little group decided we’d have to try it. Twelve is a nice restaurant and we were pleased that we’d changed our clothes after our visit to the rock climbing gym. It wouldn’t have done to arrive in shorts. We were all flexing our hands and wondering if we could hold a fork after our climbing efforts. I was a raw beginner and the others were back after a break, so hopefully we will get stronger. I was so ravenous I nearly forgot to take photos, so I must thank the friend who reminded me before it was too late.

The menu has a selection of gourmet pizzas in addition to a selection of other mains. The pizzas are $16 and serve one. If you’re as hungry as I was you can eat the lot, but if your a more delicate eater you can take home the last couple of slices. There is a good range of vegetarian options. I was describing them over the phone to our latecomer and there were so many she had difficulty deciding. In the end she chose the pumpkin pizza. It had pumpkin, fetta and spinach and was very cheesy. 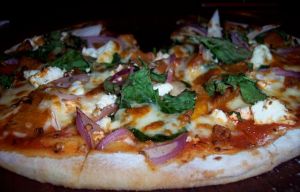 Another pizza eater chose the Italian sausage option which looked very tomatoey compared to the other pizzas. 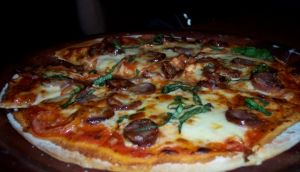 I went vegetarian with the Mediterranean, I couldn’t resist the haloumi. In addition there was zucchini, capsicum and olives. I got a couple of non-coeliacs to taste my gluten free crust for comparison. It was a little drier and not as well risen as the normal base, but on the whole it was a winner. Most of the time a normal person would not choose a gluten free pizza for two reasons, taste and price. At Twelve neither of these is a problem. I even found a friend who said she would be willing to have a gluten free pizza and share flavours with me next time. There is no surcharge for the gluten free pizza and it performs well in the taste department too. It isn’t indistinguishable from the normal pizza, but it is comparable.

Only one person in our party tried something other than pizza. The decision was made with difficulty. It was between the brioche crusted barramundi and the roast duck pasta. In the end the duck won since it was on the specials board and probably isn’t available all the time. It had a dark sauce with mushrooms, duck and green olives. I could smell its rich fragrance from across the table. 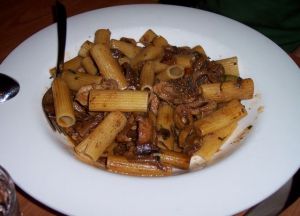 On the whole I’d recommend Restaurant Twelve if you’re after a classier experience in Newtown. It would even be suitable for a romantic dinner, in fact there were several couples there to prove it.

Ratings (out of 5 snorts)