Warning: This posting contains material that may offend some vegetarians.

The glory of German cuisine is of course the sausage or, as it’s known here, die Wurst. There is an infinite variety of sausages, in which you can find the flesh of pretty much any beast you care to name. Würste can be eaten at any time of day as a snack or can be served as part of any meal, preferably curried. The only limit on what can be done with the versatile sausage is your imagination – although, of course, if your imagination extends outside the culinary sphere it may come into conflict with certain laws, both of the land and of nature.

We are now in the second week of Advent. In Christmas markets all over Germany people are madly buying knick-knacks and paddywhacks, guzzling Glühwein and indulging in sausagosity. But this is Christmas time. No ordinary sausage will do. This is the season of the Überwurst.

Q: What are these people at the Dresden Christmas market doing?

A: They are lining up for a ‘giant Bratwurst, circa half-metre, in Baguette’.

Yes, at Christmas time in Germany sausages are bought by the half metre. Here are some people enjoying their half-metre Bratwürste. 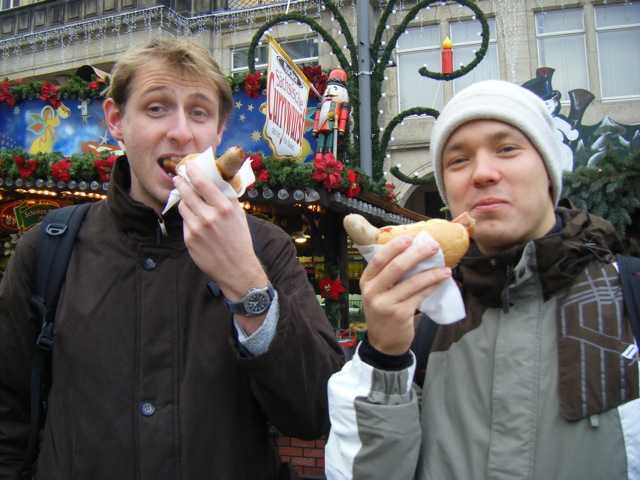