Gelatomassi in Newtown wins the Hoglet’s choice award for the best gelato shop in Sydney. Does that sound like a bit of a big claim to make? That’s exactly the idea. I want you all to recommend your favourite gelato places so that we’ll have some nice new places to try. Cunning plan huh? 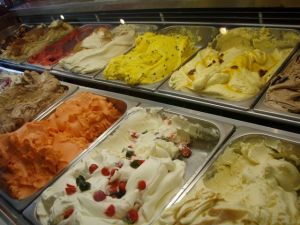 While I’m mentioning the best gelato in Sydney I should say that after Gelatomassi we have a favourite in Concord, Dolce Latte. Like Gelatomassi the gelato at Dolce Latte is freshly prepared on the premises. They don’t have such an amazing range of flavours though because they sell cakes and pastries as well. They even have pizza. Gelatomassi on the other hand is focussed on icecream and coffee and the range of flavours is incredible. Want to have fresh fig, blood orange or panna cotta? This is the place for fresh and unusual flavours that really hit the essence of the fruit or dessert they incorporate.

Cinnamon is our favourite flavour. It’s divine, creamy and with real bits of cinnamon. I had it with lychee this time. It tasted exactly like lychees which I guess shouldn’t be surprising. I was very excited to discover a frozen lychee in the middle of my scoop too. What’s more it’s one of the sorbets without fat, although my cinnamon scoop was very creamy.

James had his cinnamon with Belgian chocolate. You can’t go wrong with this one – it’s so incredibly chocolatey.

I’ve been here often for gelato, but I’ve just discovered they also have the most magnificent icecream cakes I’ve ever seen. I did get scolded by the owner when I was photographing them though. He told me it was ok, but I should have asked first. Oops.

Gelatomassi is often quite busy, but this time we managed to get a seat. This was great because we got to see one of the two chest-high gelato machines in action. It had just finished churning and we watched as the gelato was poured out slowly straight into a serving tray for the counter. Now that’s fresh gelato.

Ratings (out of 5 snorts)