The three girls who ran the worm farming workshop were my kind of hippy. In their shorts, t-shirts and tevas they picked up worm castings in their bare hands. They even thought the worms were cute. A couple of worms tried to escape onto the carpet and the girls were quick to rescue them. “Worms are naturally adventurous,” one of them explained.

I think worms are cute too, but I’ve realised not everyone feels that way. One friend asked me to photograph the worms for her, but when it came to looking at them she covered her eyes. She said “I know it’s a good idea, but don’t you think it’s gross?” Obviously worms aren’t everyone’s idea of a nice pet. Having discovered this I need to warn you that there are some photos of worms in this post. Remember that they can be loveable. 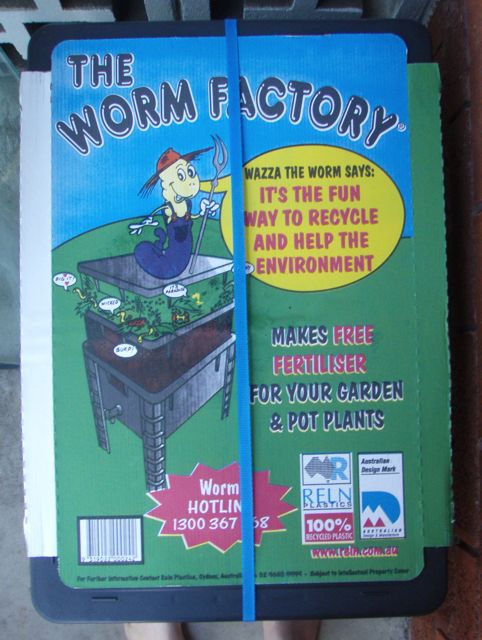 This post isn’t about eating food, or even preparing it, but it is about food. It’s about wasted food, offcuts and leftovers which are normally consigned to the garbage bin. I want to tell you about how to use this waste to feed your worms and finally your garden. It’s good for the environment and I think it’s a good hobby. If you find worms cute you could even think of them as a new pet. Worms are an ideal way to recycle organic waste in a small space. You don’t need a garden. You can keep them on your balcony. You could even keep them inside because they’re contained in a tub.

I’ve just been to a fabulous free workshop about worm farming at the Watershed in Newtown. I was so inspired that I bought a worm farm and worms then and there (which got me a few funny looks on the train home). In this post I want to tell you how to start a worm farm. Obviously I’m new to worm farming, but I’ve had some good advice from the experts and I’d like to share it with you.

Let’s start with the reasons why having a home compost or worm farm is important. Around 50% of household waste that goes to landfill is made up of organic material. Landfill is a significant contributor to Australia’s greenhouse gas emissions. It accounts for around 3% of our emissions which, for comparison, is similar to air travel. The main greenhouse gas emitted by landfill is methane, which is a much more potent greenhouse gas than carbon dioxide. The reason landfill emits so much methane is because of the anaerobic breakdown of organic garbage. Waste often travels a long way to get to landfill too. Here in Sydney the available rock solid ground for landfill is limited and some of our waste goes all the way to Goulburn (halfway to Canberra) to be buried. The other icky thing about landfill is that liquids can leech out of it into the surrounding environment. While the liquid produced by rotting organic matter isn’t too offensive it can act as a carrier for fluids that have leeched out of batteries or other kinds of chemical waste.

If we can keep the organic matter out of landfill it’s better for the environment. Worm farming is a great way to recycle your organic waste rather than sending it to landfill. The other big advantage of a worm farm is that the organic waste is recycled into fertiliser for your garden or pot plants. You get liquid waste and solid worm castings. Both of them are great for the garden.

I was surprised to hear how much organic waste a worm farm can turn into fertiliser. Worms are efficient little creatures. They can eat up to their own bodyweight each day, or at least the ones that come with your worm farm can. Amazingly, you can keep 10 000 worms in the worm farm. This means you can get rid of scraps from two people easily. The worm farm could probably service most of the waste produced by a family. The worms in the worm farm are from South America and they like a moist environment. They’re used because they’re faster at breaking down the scraps than the Australian earthworms you find in your garden and compost heap.

The really handy thing about worms is they don’t need much space. The worm farm consists of three plastic boxes. The bottom box catches the liquid fertiliser and has a tap for collecting it. The middle box is the worm bedroom. This is made up of castings (worm poop and broken down organic matter). This is where the worms breed. You can collect the castings from here to spread on your garden. The top box is where you put the food, all your vegetable food scraps – the worm kitchen, I suppose. Worms don’t like light and they need to be kept moist, so you should cover the food with wet hessian or newspaper. Then you put the lid on the top box. The worms eat the organic material in the top box which breaks down and falls into the castings box. This means you never empty the top box, just the middle one and the liquid waste in the bottom one. Both these products are great for the garden.

When you start your worm farm the worms need some bedding. You make it from coir (coconut fibre). 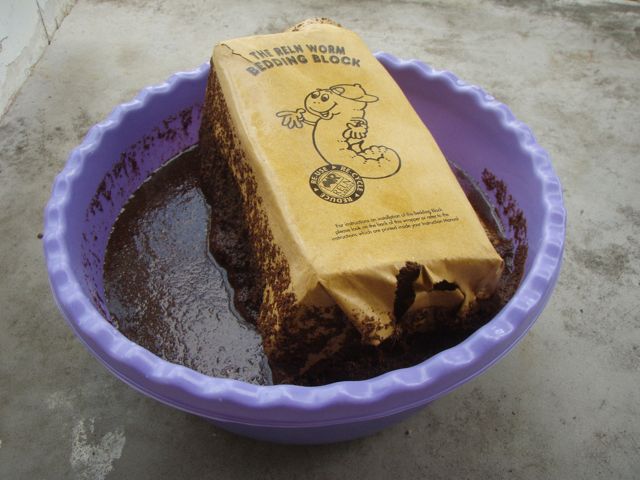 This stuff has an amazing ability to soak up water. After about 15 minutes of soaking my block had turned into mud pies.

First I lined the box with the cardboard from the packaging. That stops the coir falling through.

Then I added the coir and the worms. Finally I covered the top with damp paper. Newspaper, hessian or any other scrap paper is fine. Since I’d recently assembled furniture I used my Ikea instructions.

The bag of worms I got was supposed to contain 1000 worms. I presume no one actually counted them. They’re a mix of red, blue and tiger worms. Some of them are big and pink, like you’d expect an earthworm to be. There are also tiny, pale baby worms. While they’re settling in they seem to be living happily on the coir bedding. I tried giving them a piece of cucumber, but they don’t seem to be interested. Hopefully they’ll start eating properly soon.

I’m looking forward to being able to recycle my food waste into my potted garden. I feel guilty throwing my veggie scraps in the bin, but hopefully the solution is on its way. Grow well little worms!